Pulling more weeds or returning to the Palouse?

I had to make a choice recently. Stay home during this coronavirus situation and pull more weeds or jump into my rig and go back to the Palouse. I had already spent a couple of days there in May and got some great images so why go back? I guess the short answer was, why not? After all, it is an amazing worldwide photo destination and the beautiful rolling wheat fields are at their prime right now. It only takes me 4.5 hours to get there and I sure do have the time. Typically, Magrit and I would be well into our photo tour season in Europe by now so this is a great opportunity to get out and photograph some of the wonderful photo locations in my home state of Washington. 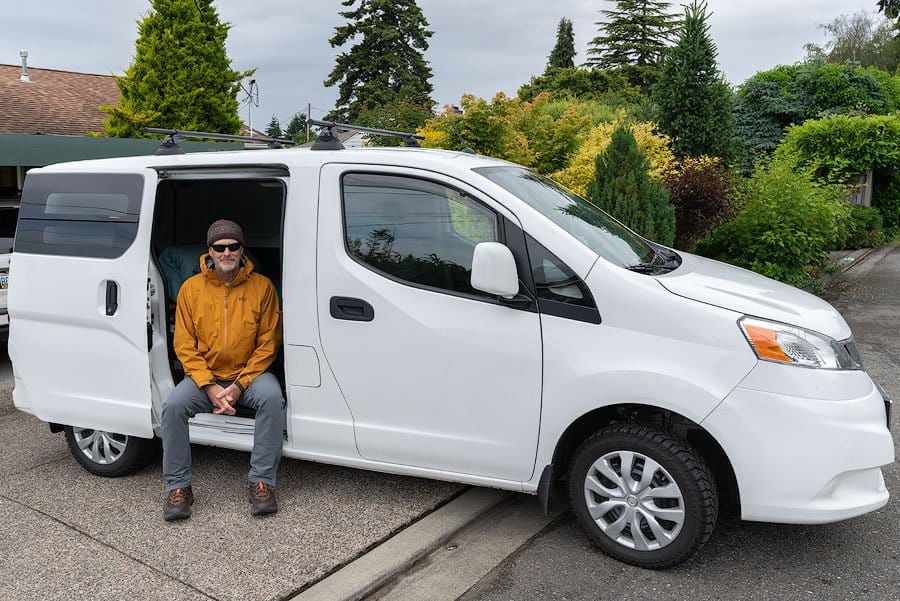 Yes, I do fit (fairly comfortably)!

I recently built a bunk in my little Nissan NV200 van and it has made for a cozy pad for photo road trips. Somewhat primitive but quite sufficient and I really love being able to sleep right at the photo ops.

I was hoping to capture the full moon setting over the Palouse wheat fields early last Friday morning and had my alarm set for 4 am. Parked on top of Steptoe Butte, I awoke to heavy rain and wind. After one brief glance out the window, it was very convenient to be able to just roll over and snuggle back into my cozy sleeping bag for a few more hours.

After a couple more hours of sleep, coffee, and breakfast, I resumed the hunt for photo ops. The Palouse has numerous dirt and gravel roads winding through the rolling wheat fields. As it had rained pretty heavily overnight, I made sure to avoid the dirt roads and stick to the gravel-covered ones. As usual, I learned my lesson the hard way years ago, getting properly stuck on one of those dirt roads during wet conditions in the middle of the Czech Republic.

The light was pretty dull with a heavy cloud cover and not too conducive to getting great images. I recently wrote a post titled “Is there a substitute for good light in landscape photography?” My answer to this question was a resounding “no.” So, following my own advice, I took another break and headed down the road to Colfax for a mid-morning cappuccino from a surprisingly good espresso drive-thru joint.

Recharged with some go-juice I headed back north toward Steptoe Butte and, as it often happens in the Palouse, the mid-morning cloud cover began to open up a bit. Sometimes, this partial break in cloud cover with small openings scattering shafts of light across the landscape can be much more interesting and produce impressive and impactful photographs. In this case, the background cloud cover was quite heavy but when I waited patiently for the foreground subject to light up, I was able to salvage some pleasing photographs.

This is the lone tree from below in the image: Sundown in the Palouse.

Speaking of pleasing photographs, shortly after returning from my May outing to the Palouse, I spontaneously decided to enter an image from this photoshoot in the B&H Optic Conference Photo Competition. Nothing to lose, it was free and very easy to do but in no way did I think I had a chance of winning with so many great images being submitted from around the world. As you might imagine, I was pretty floored to get the news that my image, Sundown in the Palouse, received the award for Best in Landscape. So nice to get some kudos once in awhile. Here is what the judge, Clyde Butcher, had to say about the photo.

So in this very challenging and interesting time, with major setbacks for most of us, I feel that it is good to try and make lemonade out of those lemons! A great time to get out there with your camera and pursue this endeavor that we photographers are so addicted to. After all, you never know when you might capture an award-winning photograph. :-)